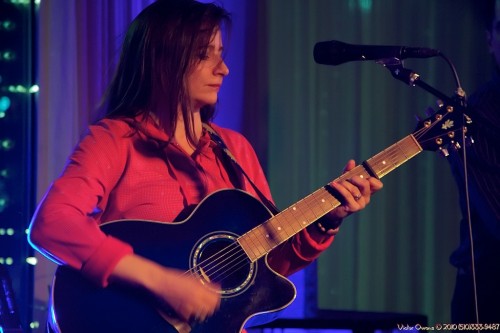 Clara Bellino moved to Northern California at age 17. She has played many benefits
across the U.S. and toured France, the Northwest and the California Coast in support of her third
release: “This Is Happiness – Hand In Hand”. She sings pop jazz with a 60s Euro-Twist. Songs about
peace and love in English, French and Spanish. Since 1992, Clara has worked in many films (including starring as a singer in the 1993 feature film, Steal America) and commercials, and she has had extensive voice over work.

I lived here for 2 years when I was 5 years old; my folks were teachers on a Fulbright scholarship.
I moved back to the U.S.A. at the age of 17 to broaden my musical opportunities. In France I completed a 10 year National Conservatory program. After that, at the time, the choices seemed limited to either being a classical musician or a jazz musician. Or the catch 22 of having performed a hit on a variety tv show, so a production company would book you a room for a live show. I was enrolled and accepted to Berklee School of Music on the East Coast at 16. But my folks thought I was too young. After visiting the school they said they’d support me to study in University in France. So I majored in English and languages in Chambéry, Savoie. I attended the first year, but the following year I found a way to come to California. I figured if I could play music in California, while taking my exams in France at the end of the year, that was more fun. Originally I was only supposed to be here for 3 months. But I kept coming back. They weren’t easy decisions.

2. What advice do you wish someone had given you when you first moved to the USA?

Just because folks have been given an opportunity doesn’t mean they’re as dedicated as you who came here for that opportunity.

3. What did you do professionally in your country before you moved here? How did you get into acting and music?

Professionally not much. I was 7 when I attended the National Music Conservatory and completed a 10 year program. It involved theory, solfeggio, harmony, writing in 7 keys, strict exams! Played classical piano, tenor recorder in a quartet, classical guitar for 5 years.  I also took ballet for a few years.

I started my first band at 17 in Los Altos, CA. For a while I played bass in a reggae band. Then moved to San Francisco. I started booking my own shows. On stage I sang and played keyboards, to a drum machine I had programmed, with a girl friend I’d taught what I knew about bass. My first shows were in the Tenderloin in SF. Soon after I took acting classes to enhance my singing performance and realized I’d always wanted to act. I studied with Eric Morris. One of his claims to fame was to have worked with Jack Nicholson.  I was terrified; the very first weekend workshop he asked me to sing one of my songs as if I were Ethel Merman. I’d never heard of her, and I was very shy. I had the lead role in my first play and played Svetlana, Stalin’s daughter, from age 18 to 43. Again I was terrified.

4. Best moment of your career so far?

That’s tough to answer. Playing the Winter Olympics in my hometown of Albertville in 1992 with my band Flying Monkeys is up there. Playing benefits 3 years in a row in Washington D.C. where when I showed up my guitarist friend Dan Sachs had taught a band all my songs was pretty awesome too. Recording a duet in 2012 with my late friend Bobby Sharp, author of Unchain My Heart, at Fantasy Studios in Berkeley had me on top of the world. He gave me a song to release that he had written it in 1947. Nat King Cole had shown interest but got ill before recording it.

5.  How many albums have you recorded, where in the US have your performed and what are some of the movies or commercials you have you acted in?

I have recorded 4 albums so far, am preparing for the next one. I had the lead in my first film. I played a French-Swiss singer in San Francisco (quite a stretch!) on my way to Japan. It was called “Steal America,” a Black and White Jim Jarmusch-style, full-length feature.  Since then, I wish I had kept track of the amount of films I have worked on!  Some of the highlights were working with Clint Eastwood on True Crime and being directed by Robert Redford at sunrise in a Sonoma jogging scene; (I was Kristen Scott Thomas’s leg double in The Horse Whisperer.) I also had the fun privilege of being Cheech’s (Marin’s) stand-in on a season of Nash Bridges.   As far as commercials go, I’ve worked on many. Recently I did voice-over work for Haagen-Dasz in Italian. I love voice work. I recorded 12 voices for a training course in Latin for an East Coast University. I studied Latin for 6 years in high school in France and enjoyed it!

6. What are three things you like about the USA?

My husband.
My friends.
California.
7. What is your favorite American food? Favorite city in the USA? Favorite store and restaurant?

8. What advice would you give to other expat women who are in the music industry and have recently moved here or are planning to move here?

Do every day and consistently the tedious things that most musicians don’t want to be bothered with. Be consistent. Treat it like a business. Don’t wait to be discovered. Discover yourself. No one is going to rescue you. Build relationships. Practice regularly. Get organized. Build a team. Do not attempt to do this alone. But first get very clear on what will make you happy. Then reverse-engineer your dream. In 15 minute increments. Eventually it adds up.

9. What are some of the biggest hurdles you faced in your industry and how did you overcome them?

It’s funny because at times I was so looking in the future and aware of certain obstacles to my idea of success, that I missed part of how successful I was actually being. Now I make sure as much as possible to enjoy each moment. So I would say living in the future is an obstacle I overcame by gaining perspective on what success means to me.

10. What inspired you to write the song about immigrants in the USA, “Potential Criminal”? Can you tell us a little about the song and the words?

I became an American in 1997. My mom was very worried I would lose my French citizenship. I told her not to worry about that, it’s almost impossible to lose your French citizenship.  And that the only difference now would be that if I screwed up I would no longer be deported, I would go straight to jail. So initially it was a letter to my mom. In it I say: “Oh say can you see, the mess your courage got us in!” cause, my mom at 25, with my dad who was 32, and my brother and I in tow came to teach in the States. We came here on a boat. Pulled up in New York harbor. If it hadn’t been for their courage and sense of adventure, I wouldn’t be here. They gave me a taste of something that never left me. The chorus says:

In a broader sense, it’s an ode to all immigrants. What I never envisioned is how many meanings this song would end up with through the years: at first it was about the responsibilities bestowed upon you when you get sworn in as an American citizen. After 9/11, it pertained in my mind to those folks who were Americans and racially profiled. And now it applies to all of us. And illustrates that what can be done to one can be done to all. And it looks like that’s about to change again. The song can be heard on the homepage of my website: http://www.clarabellino.com

11. What are three things you found about the USA that were different from your country or you found hard to adjust to?

Oh quite a few differences: the importance, generally, of being all you can be. I think in France it’s, again generally, more important to be happy. Not that the two are incompatible. But in France it has been clearer for longer that happiness comes first.
The amount of processed food that’s not even food, and the amount of people who eat it.
The fact that as a French white chick I have gotten my healthcare from alternately: an all Chinese Public Health Center, a Mexican clinic or a Native American Health Center. Even with braids I don’t look like I belong! Those have been the communities that take care of their own, and the uninsured, until now.

12. What are three fun or interesting facts about your home country?

French folks have a very self-deprecating and teasing sense of humor, a way with words and expressions that have me crying-laughing every time I go back. They’re not very politically correct.
They’re very hospitable.
When Americans swear and say “Pardon my French”, it’s not French, French swear words sound much more exotic!

13.What is your favorite quote?

“There is no way to happiness, happiness is the way.”