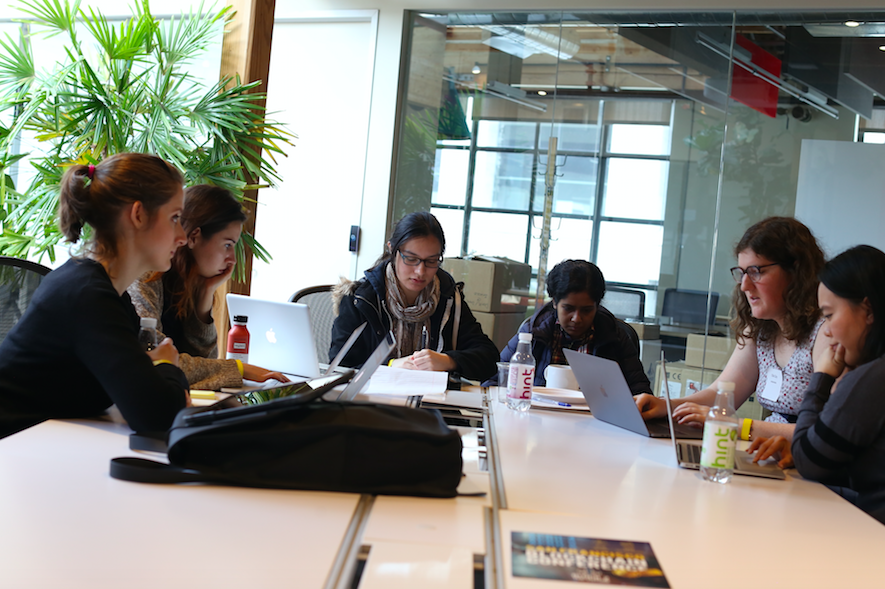 Our 4th All-Women Hackathon was a blast! At Galvanize in San Francisco, over 125 women gathered to tackle challenges focused around women’s safety, gender equality, health, and inspiring girls.

“I started this because when I went to my first hackathon, I was one of only three women in the room,” says The Expat Woman Founder. Nyna Caputi. 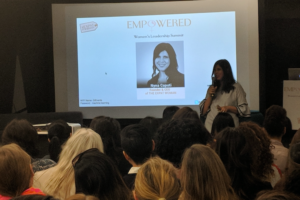 After a few words of encouragement from our founder Nyna Caputi and the co-founder of Harbor Arisa Amano, women with hackathon project ideas quickly took to stage. They pitched their ideas and shared their experience. Eight teams formed around the most popular ideas, and they headed upstairs to power up their laptops and begin.

“One of the things I noticed as a big difference between this [] and the other hackathons I’ve attended, was the readiness of women to join teams. …They all dove right in, and I find that amazing.” – Juliet Oberding, Co-Founder and CEO at Predictably Well and WomenHack mentor 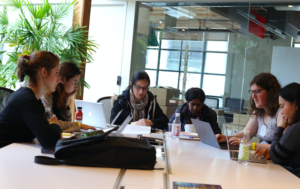 Each team had a mixture of backgrounds and skill. They brainstormed how to tackle their challenge, mocked up ideas, and got to work. Some women learned coding on the fly, while others brushed up on code they hadn’t used for a few years. Teams had access to a skilled group of hackathon mentors who gave advice on business models, code, time management, and more.

What an incredible day. Thanks to The Expat Woman team for all you did to pull it off – it was by far the best hackathon I’ve ever attended. So well-organized, and tons of talented, impressive women to connect with.

By the end of the evening, excitement won out over nerves and exhaustion. Each team pitched their hackathon project to an audience of their peers and judges.

“It was an opportunity to be part of a great panel of judges and great event where we got exposure to brilliant up-and-coming young female minds. The ideas and the hacks pitched were nothing short of inspiring. They put us at ease knowing that the next generations of young women will definitely shine,” says WomenHack judge, Nawar Nory.

Thank you to our incredible judges for len 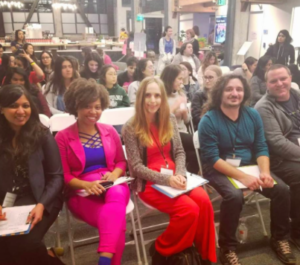 ding us their expertise!

After much deliberation, the winners were announced…

Contributor Climate – In code reviews, people can help improve a section of code by commenting. However, too many commenters can slow the approval process and create inefficiencies. The team created a rails repository to analyze sentiment keywords to prevent bias against women’s code projects.

Wear Guard – This app connects with wearable technologies in order to provide you with alerts and accurate safety data about your current location.

Code2Shop – By building a platform where women could earn shopping rewards, this team hopes to incentivize more women to to learn code. Each coding challenge completed earns points that could be redeemed for clothing or accessories.

Baesick for Life – This mobile app gives women the ability to take control of their health by providing a central hub to store their health data and connect them with doctors for healthcare concerns without needing to physically visit the doctor.

Congratulations to all of our WomenHack participants!

“I was so proud to have Harbor be a sponsor for the Empowered Women’s Leadership Summit and judge at WomenHack – the all-women hackathon. It was an inspiring event with amazing speakers, and the level of talent at the Hackathon was really impressive.” – Arisa Amano, Co-Founder and Chief Product Officer, Harbor