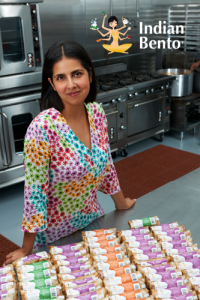 “[We have] no sales people, no marketing department, no ad spending…venture capitalists have invested over a hundred million dollars in Bay Area-based food businesses. [We]have had the same success, except completely bootstrapped”.

Pashmina Chaudhary shares her journey from being a first class flight attendant to a successful food entrepreneur in the San Francisco Bay Area. She shares her recipe for success:

Tell us a bit about yourself? Where are you from originally and why did you move to the US?

I am originally from Bombay, India and I was a first class flight attendant living in Hong Kong before I moved to SFO. Jetting around the world, sometimes I would think, “If it’s Tuesday, it must be London… and Chicken Tikka Masala!” or “Singapore means Laksa and Roti Paratha Canai in Little India!” I moved to San Francisco after visiting the City a few times and meeting my husband, Vik, who’s a tech entrepreneur.

What prompted you to start a food business?

When I moved to San Francisco, I was astonished by the sameness of Indian food and the lack of street food (the flavors of which I grew up with in Bombay). I refused to believe that great Indian food had to be only spicy and induce a coma after a meal. I wondered why San Franciscans would be so particular about the health, texture and flavors of all foods, but were willing to give their local Indian hole-in-the-wall a free pass. I set up a web site with a home-grown online ordering system and started taking orders. Zynga, our first corporate customer, came calling and I and a co-worker worked all night to cook and deliver 400 meals for their team lunch! It was a hit, we got a subscription customer, and Indian Bento was off and running.

What are the rewards and challenges of being a food entrepreneur? How do you cope with the challenges?

The best reward for us is that we’re changing the way America experiences Indian food. Today our packaged Indian Bento boxes are available in 50 stores from California to across the state borders in Nevada, most of them Whole Foods Market stores. It is really rewarding to get an email or call from someone who said that we changed the way they think of Indian food. The biggest challenge for us has been owning our own destiny – we started out renting tables at shared kitchen spaces, and every year our rent would double because kitchen owners would see that we were doing well.

How do you define success?

As an entrepreneur, success comes when you build a self-sustaining business. Today we own our own huge commercial commissary in San Francisco, with kitchen staff, drivers and a fleet of trucks. We have paid back every loan that we’ve taken, and have built a business that is growing at 40% a year. Yet, it has no sales people, no marketing department, no ad spending – all of our business comes from referral and repeat customers. In the meanwhile, venture capitalists have invested over a hundred million dollars in Bay Area-based food businesses, and we’ve had the same success, except completely bootstrapped.

Your company supplies food to several Whole Foods stores. How did this come about?

When I started Indian Bento, I read anything that had to do with the food business. I read that Whole Foods in the Bay Area were seeking new and innovative foods. I cold-emailed them and they responded with an appointment at the Whole Foods in SOMA. I took our newest item, a “kati roll” which has now become very popular. Their food buyer took one bite of the Chicken Kati Roll, asked me if I wanted to grow big and approved us to work with Whole Foods. And the rest, as they say, is history.

What is your most proud moment with regard to Indian Bento?

When I was a one-woman business, Attorney General Kamala Harris, was then the District Attorney in San Francisco. Kamala had a very busy schedule, and her assistant would order our dal and other vegetarian dishes. She said that he missed her mom’s cooking. A couple of years later, Kamala Harris was inaugurated as the state’s Attorney General, and Indian Bento catered the event. I was so proud to have been part of a historic event in Sacramento, and proud for Indian Bento.

What keeps you up at night?

Actually, nothing. I sleep really well, because I didn’t sleep for the first 5 years. We would start cooking at 2:30 am in order to make fresh Indian food and deliver by lunchtime. I am happy to say that I don’t do that any more, though I am usually at the commissary by 7 am, 6 days a week.

In 8 words or less, what advice would you give to expat women who are aspiring food entrepreneurs?

Build a business for sustainability not speed.

Can you share a simple recipe with our readers for the holiday season?

I don’t cook out of a cookbook but by feel, and have taught all our staff to do that. We don’t follow a single recipe, and so I really don’t know how to create one! I’ll give you a recipe for a successful business, instead:

The Indian Bento Recipe for Entrepreneurs

Mix it up, shake it up, and serve over and over – it’s a bottomless glass full of exhilaration, nerves, and delivers a great satisfying feeling for years to come!